Why Brown Fat is Something You Want for Easier Weight Loss 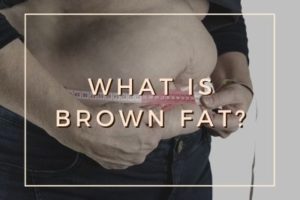 Brown fat is a part of our bodies that seems extremely counterintuitive.  After all, most of us think about weight loss as a process of burning off excess fatty tissue.  However, not all forms of that tissue are alike, and this particular type can actually work in your favor.  It has more mitochondria than the white adipose tissue – the stuff that tends to threaten health in excessive amounts – and can even help with faster fat burning!

What Does Brown Fat Do?

As its name suggests, brown fat, unlike the white stuff, is much darker in color.  The white adipose tissue is what the body uses for insulation. When it builds up in large amounts, it’s what causes us to be overweight or obese and those conditions can lead to an increased risk of other health issues.

On the other hand, brown fat contains more mitochondria. It helps the body to generate heat – a process called thermogenesis – and torches calories as it does so.  Research shows that it also plays a vital role in blood sugar level and metabolic rate control.  Therefore, while we might be trying to burn off excess white adipose tissue, the brown stuff is actually quite beneficial to our ability to reach our goal.

While we’ve long been aware of white adipose tissue and what it’s about, research into – and understanding of – brown fat remains quite recent. In 2009, a research paper was published about a woman Inuit elder, proving the existence of brown fat in humans and the role it plays in temperature regulation.

Since that paper’s publication, MRI scans and other forms of technology have confirmed its existence and that it is different from white adipose tissue in its makeup and function.  It is mainly located in large deposits in upper chests and neck areas. It’s believed that kids have the largest proportions of this tissue – what we typically refer to as “baby fat”.

Unlike white adipose tissue, which is found around organs, along the waistline and hips, as well as the backside and thighs, brown fat deposits are found in strategic deposits all over the body.  Though mainly around the neck and upper chest, it’s found in places that are especially important to keep warm, when exposed to cold air or water.

The heat it produces keeps the body temperature regulated even when exposed to cold, but it is also believed to play an important role in hunger control (particularly in people with diabetes), blood sugar regulation, heart health and energy expenditure (metabolic rate). With all these factors working in your favor, weight loss becomes considerably easier.  Therefore, even if you’re trying to burn fat, the brown stuff is something you want on your side.